In conversation with our young researchers: Christopher Morse 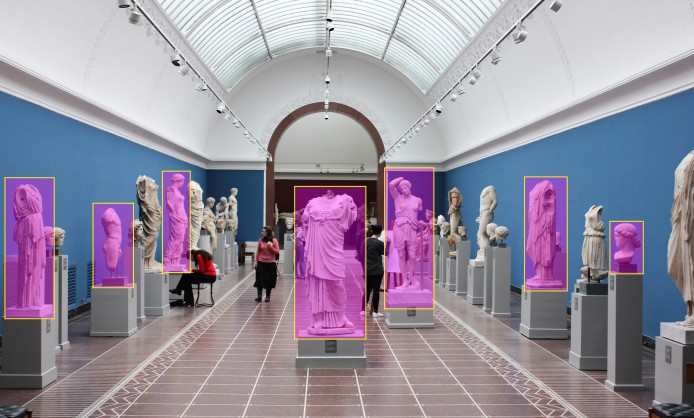 Museums and cultural institutions around the world have been digitising their collections for decades, resulting in large networks of digital repositories all around the world that are not only accessible by the public, but usually free to use.

In an age when the museum experience is no longer tethered to physical spaces, how might we design for memorable experiences in the digital?

Christopher Morse is conducting a doctoral project as a joint member of the Centre for Contemporary and Digital History (C2DH) and the Human-Computer Interaction Research Group of the University of Luxembourg. The human-computer interaction researcher specialises in the design of user interfaces for digital arts and cultural heritage.

Bringing together the digital humanities, museum studies, and computer science

Christopher Morse’s work is grounded in human-computer interaction methodologies, which emphasise human-centered design thinking approaches to the development of new technologies. His project is highly interdisciplinary, drawing from the digital humanities, museum studies, and computer science.

The American researcher investigates the application of user experience (UX) design methodologies in the development of next-generation interfaces for museums.

“Within my own project, I partnered with the Musée National d’Histoire et d’Art in Luxembourg City to host a series of design workshops with the public on the subject of digital museum interfaces.”

In terms of impact, Christopher had the opportunity to present his research to cultural institutions in Luxembourg, i.e. the Musée National d’Histoire et d’Art and the Lëtzebuerg City Museum.

A researcher at heart

A graduate of the University of Massachusetts Amherst in Japanese Language and Literature and Harvard University, earning a Master of Theological Studies and a Master of Arts in Liberal Studies, Christopher developed an interest in library and museum studies, as well as the emerging field of digital cultural heritage.

Christopher moved to Luxembourg from the United States in 2017 to run his research project.

“I have always been a researcher at heart, and the doctoral programme certainly put those skills to the test. Research is more than just reading and writing; it’s also about defending your point of view, challenging your own thoughts, and developing resilience against rejection.”

Two main factors were appealing to the researcher: “First, Luxembourg is a multilingual country, something I appreciate tremendously as a lifelong language learner. Second, the description of the call itself was a perfect fit: research at the intersection of the digital humanities and psychology.” Indeed, this doctoral programme felt like a natural continuation of efforts he made as a co-founder of an annual symposium at Harvard University called ArtTechPsyche.

“In my experience, the research infrastructures are robust and well supported. I never felt like I was missing out on anything I may have needed to conduct my work. What I have found is that researchers have a lot of agency to make the most of their time in Luxembourg, they must merely speak up about their needs.”

In 2019, Christopher Morse was one of the speakers at TEDxUniversityOfLuxembourg. Titled “Experiential Culture: Feeling the Museum of the Future”, his talk offered a new approach to interacting with our shared cultural heritage.

The experience of visiting museums has evolved to extend beyond the walls of the institutions themselves into digital spaces, where online galleries, exhibitions, and virtual tours invite audiences to explore arts and culture from their personal devices. However, generating interest from the public around these platforms remains a challenge, and the digital experience rarely compares to an in-person visit. Building on research that demonstrates the effectiveness of emotional design as a way to generate public engagement with physical museum spaces and exhibitions, Christopher showed that a user-centered design approach has the potential to develop novel experiences around digitised museum collections.

Christopher has found in Luxembourg a place he can call home. “I have discovered so many things about Luxembourg itself that have motivated me to stay long term. It feels like a place that embraces the values that are most important to me, such as multilingualism, multiculturalism, and open-mindedness.”

“My favorite thing about Luxembourg is how well I feel it matches my values. No country is perfect, but during this time of sociopolitical upheaval, it is a privilege to live in a place where many people embrace differences, rather than fear them.”

Christopher Morse’s research comes from the FNR PRIDE funding. Find out more about him and his projects.